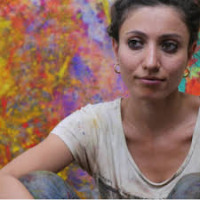 Painter
Artworks
Biography
Aurelie Freoua is a French artist living and working in London. She originally studied Mathematics and Economics at Paris Dauphine University, but went on to study art and completed an MA in Fine Art at Camberwell College of Arts, London 2016. She also participated in the Slade Summer School. Since then, her paintings have been exhibited in several group shows in London, New York, Miami, Paris and the South of France. Aurelie had her first solo show ‘Symphony of Colours’ in Mayfair, London, 2017. Her artworks have featured in poetry collections including ‘Echoing’ published by Ampersand. She created a work specially for the recent Bonhams’ auction in support of the Grenfell Tower victims. Aurelie has taken part in workshops organised by the Digital Maker Collective at Tate Exchange, Tate Modern. She has also performed and improvised live painting in response to poetry and music during The London Jazz Festival at the Vortex Jazz Club.

Through her work, Aurelie aims to explore and transcend such notions as the invisible, movement, ephemerality and the intangibility of emotion through vivid and harmonious compositions of form, line and light. Throughout her practice she values authentic representation and intensity in a process of ‘making visible’.