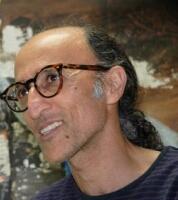 Painter
Artworks
Biography
Was born on 1960 at Isfahan, Iran.

He graduated from Tehran University, at Fine Arts 1975,

He also educated at Isfahan School of Fine Arts.of new expressionist.
:
He lives and works in British Columbia, Canada, Doust's art had prominent presence in the countries of Persian Gulf region, and also he participated in many Exhibition in Europe and Canada.

He has been residing in British Columbia, Canada since 1998.some of his work is in permanent collection of modern art museum of Kuwait ,