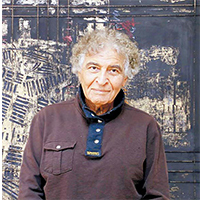 Painter
Artworks
Biography
Was born at Tehran, Iran in 1935 is an Iranian painter.
Arabshahi held his first solo exhibition at the Iran-India Centre, Tehran, in 1964, four years before graduating from the College of Decorative Arts, Tehran. His work includes oils on canvas, sculptures and architectural reliefs- among the latter commissions for the Office for Industry and Mining, Tehran, 1971, and the California Insurance Building, Santa Rosa, California, USA, 1985.
His sources of inspiration comprise Achievement and Assyrian art as well as Babylonian carvings and inscriptions. Combining tradition and modernity. His work has been shown in a number of solo and group exhibitions in Iran, Europe and the United States including Two Modernist Iranian Pioneers, at the Tehran Museum of Contemporary Art, 2001; and Iranian Contemporary Art, Barbican Center, London, 2001. He lives and works in Tehran and California.